Because some of us still tend to associate tattoos with a disreputable kind of people, it may surprise them to realize that Christian tattoos are extremely popular. Yes, Christians do get tattoos, and for many of them Christian tattoos represent a unique and personal way of keeping Christian iconography and religious imagery close at hand.

Unlike the Jewish faith, Christianity does not have any rule against tattooing, except to caution young people to be modest with regard to the image they embody in the world. So, as long as it is tasteful and appropriate, a Christian tattoo is a powerful symbol that resonates with a lot of Christian youth.

Christian tattoos range from symbols of the religion (cross, praying hands, rosary, Jesus fish) to scenes from the Bible to specific figures from Christianity (the Virgin Mary, Jesus, angels). A great variety of Christian symbols have been turned into tattoo images – but none have been more popular than cross tattoos. Christian tattoos depicting various forms of the cross are always plentiful. After all, the cross is the most apt and most recognizable Christian image of all.

Other popular cross images include:

When many people think of a Christian tattoo, they think of Jesus tattoos. The image of Jesus is one that is known all over the world, and it can make a breathtaking tattoo image.

A tattoo of Jesus Christ can be a small figure with little detail other than an outline and perhaps some robe details. This is generally enough to identify Jesus tattoos for the figure they represent.

Some people opt for a far more elaborate figure of Jesus with plenty of color and detail. This can include the facial features of Jesus, plenty of beard details, the folds of his robes and even his sandals. These detailed tattoos may feature the kind eyes of Jesus that are a symbol of his loving nature. Lately I've been getting emails with the following question:

Did Jesus have a tattoo on his thigh?

After a little research I found out the following Bible verse is the cause of this confusion: in Revelation 19:16 it is written:

On his robe and thigh he has this name written: KING OF KINGS AND LORD OF LORDS.

Now, I can't say for sure if he had one or not, but I seriously doubt you should take this Bible verse literal, it must be a metaphor of some kind. Jesus was a faithful Jew and tattooing was a sin: Besides the cross, there are other Christian images that are often used in Christian tattoos, Jesus fish tattoos are a great example. The Jesus fish (aka Ichthys) is a stylized fish symbol that is often used as a symbol of Christ.

The Jesus fish was known by the early Christians as a secret symbol: believers would draw one arc of the fish in the dirt, if a stranger drew the second arc, they knew they could trust each other. Even today, the Jesus fish is a symbol that shows that the bearer is a Christian.

The fish has an important symbolic meaning in the Bible, several of Jesus' disciples were fishermen and Jesus declared them "fishers of men". The Jesus fish symbol is also intertwined with the story of the loaves and fishes.

The Jesus fish is a compact, but quite striking symbol that lends itself well to tattooing, especially in black. Rosary tattoo designs are often combined with praying hands, a heart, a cross or with words, usually a Bible quote or verse. The most popular body parts to have a rosary tattoo are the ankles, hands and neck.

The reason ankle rosary bead tattoos are so popular nowadays is because Nicole Richie, American actress and socialite, has one on her left foot. She is the daughter of pop singer Lionel Richie and best friends with Paris Hilton, with whom she stars in the tv series "The Simple Life". Nicole Richie has other Christian tattoos as well: the word "virgin" on her wrist, angel wings on her back and a cross on her lower back.

The Virgin Mary figures prominently in the New Testament and is particularly revered among Catholics. Many Catholics choose Virgin Mary tattoos because she is one of the most prominent symbols of the Catholic Church.

Tattoos of the Virgin Mary are generally drawn with clean, simple lines and is an easy tattoo to draw for a very small tattoo as well as for a larger one. Few details are needed other than a simple garment, a veil and the hands and face of Mary.

The traditional image of the Virgin Mary is one that is drawn in white and blue or in blue, white and gold such as the one seen on Our Lady of Guadeloupe. This makes for a calming image with a bright splash of the color blue. The image is sometimes depicted with red and blue for a brighter image.

Angels are beings that are loved all over the world, and the world’s tattoos reflect this affection. People from every background choose angel tattoos to display their Christian faith and/or their belief in these beings of light. Angel tattoos are popular among women, but plenty of men also seek out angels for their tattoo designs. 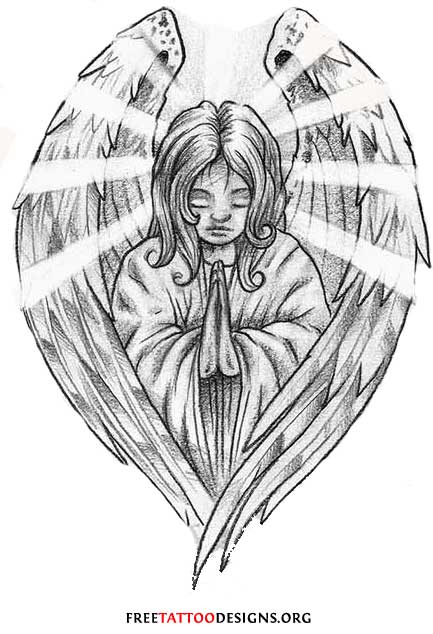 An angel can be represented as a complete human figure with wings and may or may not have a halo present. But some people prefer to represent an angel by getting angel wings tattoos instead of an entire figure. The wings can be on their own, attached to someone that they know, or the wings themselves can be tattooed on the person’s back in the place where wings would sprout on an angel.

An angel with a sword is a meaningful symbol for those who know Biblical history and want to depict the many angels who have fought for their faith. The sword is a symbol to many of the fight against temptation and Satan that people must undergo every day.

In Christianity the Devil is known as Satan, Lucifer or Beelzebub. Christians believe the Devil is an angel who rebelled against God. He is a metaphor for the human sin and temptation.

The praying hands tattoo is a symbol of the power of prayer in the life of a Christian. The hands can represent the hands of Jesus as he prayed or it may be a reminder of the importance of prayer. Some Christians get praying hands tattoos to remind themselves and their loved ones to pray more often.

Praying hands tattoo designs may be a simple outline of two praying hands or they may include the wrists and more details. For Catholics, the praying hands often have a rosary in them that is trailing over one or both of the hands. The beads can add a little bit of color to the design and may be adorned with a cross at one end.

Christian tattoos are not always graphical or symbolic in nature, lettering tattoo designs (Bible verses, ...) are popular as well.

Another type of lettering tattoos that are high in demand are Hebrew lettering tattoos. Jesus and his Apostles, family and early followers were Jews, so it's not hard to see why someone wants a tattoo of his favorite Bible verse in Hebrew script.

The popularity of Hebrew writing tattoos was kick started by celebrities like:

Hispanic Christian tattoos – often gang related – are an intriguing sub-group. If you know anything about the culture, you won’t be too surprised to learn that most Mexicans and other Hispanic people, even if they are involved in gangs or other criminal activities, are deeply religious and rely on their Christian symbols to both identify and protect them.

These Christian tattoos are usually rather complex, many involve a tattooed image of a saint, Jesus, or the Virgin Mary. Hispanic tattoos often feature words as well, usually a Bible verse, perhaps accompanied by a loved one’s name. Many Mexican gang members have multiple elaborate tattoos, allowing the individual to literally wear his identity and emotions on his skin, if not his sleeve!

Whatever their specific design, Christian tattoos are a symbol of faith for many that reminds them in times of trouble to rely on that faith to see them through.